The Times of Kerim by Katy Hollway 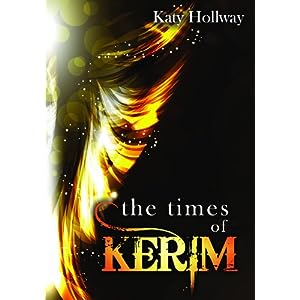 In the year 6000 BC humanity was on the brink of extinction. Their ancestors forgot and betrayed the ancient knowledge making a way for the forms of darkness to become like humans. Young Kerim possess the insight to detect the mortals from the dark seeds of the night sky. She alone holds the key to the end of the world or its saving grace. But when she is captured and prepared for a sacrifice the divine plan must be set in place. She is to found, rescued, and convinced she is the one!

This is the debut novel by Katy Hollway, which follows Kerim, a girl who is living in troubled times. A witch has come to her town and has corrupted all the settlers there, except her father and herself. Life becomes difficult for Kerim as she becomes a target for the next sacrifice. She is captured, by her brother of all people, and locked in a cage to await the awful things that the witch promised to do to her. However, she is freed by a figure in white who then protects her from other evil to come. Listening to this man, she runs in the direction he sends her and to safety. There she finds shelter and falls in love with Japh – plus she finds something extraordinary. She finds that the family are building an ark. She is welcomed into Noah’s family and the story follows her as she is let on the Ark.

To be honest, I had no idea what to expect from this book. The blurb doesn’t give too much away and in the first couple of chapters you are launched straight into the horrors Kerim is rescued form without any explanation. I have to say though, I was pleased I kept reading! It took me by surprise to run into Noah! I didn’t work out immediately what the big wooden structure was! Silly me!

This book is aimed at young adults and is a Christian book. The writing style, how Kerim hears God and the angels that look out for her, reminded me a lot of Karen Kingsbury, which I really liked. I enjoyed the story. It was fascinating thinking about what life would have been like in 2000BC; what life would have been like on the Ark and I loved reading about how God protects His people. In this story there was nothing too big for God and his army.

I liked the characters. I felt a lot of empathy for Kerim. She couldn’t see how special she was and even in the worst times she wanted to protect and rescue her family. I liked Japh. I found him a little forward at times but he had her best interests at heart and loved her a lot. I loved Noah’s family. Noah was very wise and calm; however it was his wife Tabitha whom I really liked. She was protective and caring. She understood Kerim and always had time for her.

I think this is an excellent book. It was gripping and insightful. It is encouraging and well written. I think this book will appeal to adults as well as young adults. The book isn’t overly religious. There is fear, real threat plus love and action in this book. I read this in one sitting and really enjoyed it. I am looking forward to the next book!

One thought on “The Times of Kerim by Katy Hollway”