The Cupid Effect by Dorothy Koomson 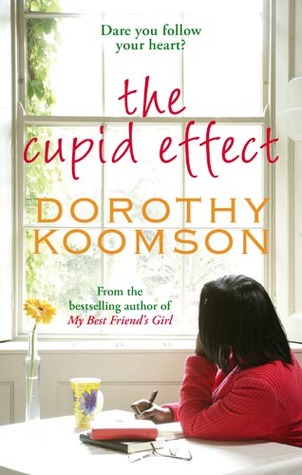 Ceri D’Altroy watches too much Oprah Winfrey – and it’s having serious repercussions. Bored with London life and writing yet another ‘have the perfect orgasm’ feature, she’s decided to take Oprah’s advice and follow her heart’s desire. Going back to college might not be everyone’s dream but all Ceri’s has ever wanted to do is lecture . . .

Unfortunately, Ceri’s new start seems to involve disrupting lives: within days she’s reunited a happily uncoupled couple, encouraged her new flatmate to do something about his unrequited love, and outed the secret relationship of her two colleagues. Only, while Ceri’s playing Cupid for others, the highlight of her social calendar is trying a new hair conditioner. Something needs to be done, but can Ceri stick to her vow to give up her accidental matchmaking for good. . ?

A delicious comedy about love, life and following your heart…

This is the sixth book I have read in 2014 and the sixth Dorothy Koomson novel I have read. This novel has been sat on my book shelves for years so I decided to add it to my 2014 Mount TBR Challenge, which is an opportunity to read books that have been sitting around for a while. I have now completed 2 books in that challenge.

This novel is completely chick-lit. It has romance, love, sex, and friendship running all the way through it. The main character is Ceri. She has decided to follow her heart and move to Leeds to lecture and research. She has made a few oaths, namely to not get involved in other people’s lives. However, these are quickly broken and she finds herself giving out advice to both her flatmates and to her colleagues. Her new start doesn’t seem that different from the life she left behind in London. And what about Ceri? Why is she the person everyone turns to when they need advice? Will she find lasting friendships and love too? And will she ever learn to not give out advice?

As I said, this book is completely chick-lit. A lot of Koomson’s more recent novels could be classed almost as thrillers – they have a “who done it” feel to them. This one does not. There was no air of mystery surrounding this book at all. To be frank, I didn’t really enjoy this book. I much prefer Koomson’s other novels. I was disappointed for the following reasons:

This is very typical chick-lit writing. If you like romance novels this one is for you. For me, I just wanted more substance and characters I cared for. For all the above reasons, I am rating this book 3 out of 5.[rating=3]