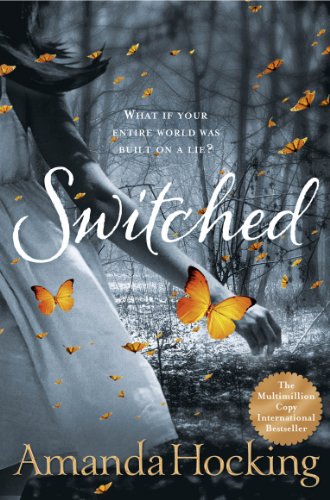 When Wendy Everly was six-years-old, her mother was convinced she was a monster and tried to kill her. It isn’t until eleven years later that Wendy finds out her mother might’ve been telling the truth.

With the help of Finn Holmes, Wendy finds herself in a world she never knew existed – and it’s one she’s not sure if she wants to be a part of.

This is the first book in The Trylle Trilogy by Amanda Hocking and the series has a been a great hit in America. I received this as a review book from Think Jam. The novel was released on 5th January 2012 in the UK and is available on Amazon as a paperback and in a Kindle version.

The story follows Wendy; a girl with a very traumatic past. At the age of 6 her mother tries to kill her, claiming that she is not her daughter and that she is evil and a monster. Her mother is taken away to a psychiatric hospital and Wendy is raised by her brother Matt and her aunt Maggie. Wendy has never really fitted in, has always caused trouble and never settled at school. She has recently changed schools and her world is turned upside down when the weird boy who keeps staring at her – Finn Holmes – appears outside her bedroom window at 3am. What is particularly strange about this is that her bedroom is not on the ground floor. Earlier that evening they had been at the school dance and whilst dancing together Finn had said some horrid things. Upset by him, she uses the mind control powers that she has to persuade another classmate to drive her home. Finn realises what Wendy has done so turns up in the night to confront her and take her home – to the land of Trylle. It seems her mother had been right, Wendy is not of this world. It turns out she is a troll – not the kind you imagine hiding under bridges, but a beautiful, powerful woman, who is remarkably like a human. She does not want to leave Matt and Maggie and does not believe Finn until a few nights later she is attacked by trolls from a different tribe, who want to kidnap her. Rescued by Finn, she agrees to leave and to set up life as a troll. What she finds when she gets there completely surprises her – life is not what she imagined. She is the Princess, switched at birth to a wealthy family so that she will get a good education and a trust fund. All seems to be going well, until at her debutant ball her home is attacked, and they are after her…

I really enjoyed this book, in fact I read all of it this morning, in one sitting! It is not a long book – only 280ish pages long. The story is easy to follow, and very enjoyable. My favourite character was probably Matt. I loved how much he loved Wendy. He named her when she was born as their parents didn’t want her, and he has spent his life protecting her. I found Wendy an interesting character – and depending with who she was with, depended on what I thought about her! I found myself feeling sorry for her when she was with the Queen – her real mother – but when she was with Finn or Rhys – the human she was swapped with, I wasn’t so keen on her as she seemed to lead them both on. Finn had to grow on me too, as he was so hot and cold. I found that very frustrating!

Switched reminds me of both The Iron Fey Series and the Twilight Series. It reminded me of Twilight because of the house Wendy was taken too. Although the house in Switched is a lot bigger it was very modern – not what you would expect in this sort of novel – like in Twilight. I was reminded of the Iron Fey series for a number of reasons: – the lead character growing up in the human world; – the tracker being at school, like Puck; – and the lead character falling for the wrong guy, like Meghan falling for Puck.

This book is full of adventure, tense moments – the sort of “what is going to happen next” moments, a romance and a great plot. This is a young adult book, but such an enjoyable read anyway. I wasn’t keen on the swearing, especially as this is a young adult novel, but fortunately there wasn’t too much of that. This is a great book – it kept me gripped, and I’m still reflecting on it later on in the day. I will definiately be looking out for the next book in the series! This is well worth reading – especially if you like series like The Iron Fey Series.

2 thoughts on “Switched by Amanda Hocking”