I always look out for the Richard and Judy reading list and thought I would post this season’s reads: 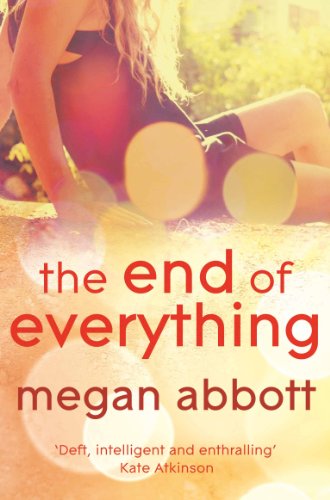 The End of Everything by Megan Abbott

A close-knit street, the clink of glass on glass, summer heat. Two girls on the brink of adolescence, throwing cartwheels on the grass. Two girls who tell each other everything. Until one shimmering afternoon, one of them disappears. Lizzie is left with her dread and her loss, and with a fear that won’t let her be. Had Evie tried to give her a hint of what was coming, a clue that she failed to follow? Caught between her imaginary guilt, her sense of betrayal, her own powerful need, and the needs of the adults around her, Lizzie’s voice is as unforgettable as her story is arresting.

The Particular Sadness of Lemon Cake by Aimee Bender

On the eve of her ninth birthday, Rose Edelstein bites into her mother’s homemade lemon-chocolate cake and discovers she has a magical gift: she can taste her mother’s emotions in the slice. All at once her cheerful, can-do mother tastes of despair and desperation. Suddenly, and for the rest of her life, food becomes perilous. Anything can be revealed at any meal. Rose’s gift forces her to confront the truth behind her family’s emotions – her mother’s sadness, her father’s detachment and her brother’s clash with the world. But as Rose grows up, she learns that there are some secrets even her taste buds cannot discern. The Particular Sadness of Lemon Cake is about the pain of loving those whom you know too much about, and the secrets that exist within every family. At once profound, funny, wise and sad, this is a novel to savour.

The Black House by Peter May

A brutal killing has taken place on Lewis, Scotland’s most remote island. Detective Fin Macleod, at home in Edinburgh on compassionate leave, is sent to investigate. For Lewis-born Macleod, the case represents a journey both home and into his past, as he attempts to rediscover the life and people he left behind eighteen years earlier. But something lurks beneath the close-knit, God-fearing façade of the Lewis community, something primal. As Fin investigates, old secrets are unearthed, and he, the hunter, becomes the hunted. The Blackhouse is a crime novel of rare power and vision. Peter May has crafted a page-turning murder mystery that explores the darkness in our soul, and just how difficult it is to escape the past

Sarah Nickerson is a high-powered working mom with too much on her plate and too little time. One day racing to work and trying to make a phone call, she takes her eyes off the road for a second too long. In the blink of an eye, all the rapidly moving parts of her over-scheduled life come to a screeching halt. A traumatic brain injury completely erases the left side of her world. As she struggles to recover, she discovers that she must embrace a simpler life, and in doing so begins to heal the things she’s left neglected in herself, her family and the world around her.

January 1937. Clouds of war are gathering over London. Twenty-eight year old Jack is poor, lonely and desperate to change his life. So when he’s offered a spot on an Arctic expedition, he jumps at it. Spirits are high as the ship leaves for Norway: five men and eight huskies, crossing the Barents Sea by the light of the midnight sun. At last they reach the remote, uninhabited bay where they will camp for the next year. Gruhuken. But the Arctic summer is brief. As night returns to claim the land, Jack feels a creeping unease. One by one, his companions are forced to leave. Soon he will see the last of the sun, as the polar night engulfs the camp in months of darkness. Soon the sea will freeze, making escape impossible. And Gruhuken is not uninhabited. Jack is not alone. Something walks there in the dark.

‘I was born twice. First in wooden room that jutted out over the black water of the Thames, and then again eight years later in the Highway, when the tiger took me in his mouth and everything truly began.’ 1857. Jaffy Brown is running along a street in London’s East End when he comes face to face with an escaped circus animal. Plucked from the jaws of death by Mr Jamrach – explorer, entrepreneur and collector of the world’s strangest creatures – the two strike up a friendship. Before he knows it, Jaffy finds himself on board a ship bound for the Dutch East Indies, on an unusual commission for Mr Jamrach. His journey – if he survives it – will push faith, love and friendship to their utmost limits. Brilliantly written and utterly spellbinding, Carol Birch’s epic novel brings alive the smells, sights and flavours of the nineteenth century, from the docks of London to the storms of the Indian Ocean. This great salty historical adventure is a gripping exploration of our relationship to the natural world and the wildness it contains.

Everything and Nothing by Araminta Hall

Cupboards were sticky from spilt jam and honey, and the oven smoked when you turned it on because of the fat that had built up over the years. Agatha would never, ever let her future home end up like this. She would never leave it every day like Ruth did. She would never put her trust in strangers. Ruth and Christian are — just — holding their marriage together, after Christian’s disastrous affair a year ago. But chaos beckons, and when the family are suddenly left without any childcare, Agatha comes into their lives to solve all their problems. But Agatha is not as perfect as she seems and her love for the children masks a deeper secret. Everything and Nothing is a stunningly assured debut, superbly evoking an atmosphere of inexorable and sinister menace that builds to a mesmerising climax in a story that is, at its heart, about thwarted and damaged love.

Next of Kin by David Hosp

When Boston attorney Scott Finn agrees to defend the son of notorious mobster Eamonn McDougal, he knows he’s putting his reputation on the line. But he also knows he can use him as bait to reel in the prize catch. In a city where mob crime once ruled, a core of corruption, greed, lies and deceit still lingers. And it seems there are those in power who will stop at nothing to achieve what they want. Finn, who grew up an orphan on the meanest streets in the city, is determined to solve the murder of the mother he never knew. In his search for the truth he uncovers a sinister trail of murder, betrayal and revenge borne by someone who could neither forgive nor forget. But who can be trusted, and who can be believed? And can Finn find the answers before it’s too late?

So what do you fancy reading? I like the look of Left Neglected, Everything and Nothing, The Particular Sadness of Lemon Cake and The End of Everything.

For more information and to buy the books cheaply visit here.