Pride and Premiership by Michelle Gayle 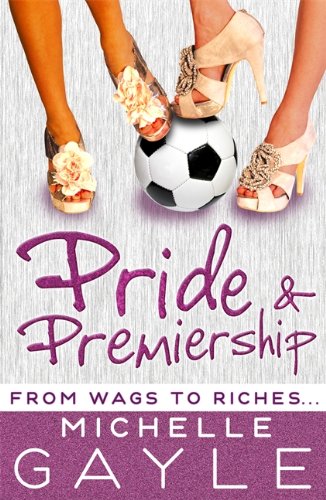 This is the diary of Remy Louise Bennet, age 17-1/2. Remy Louise Bennet has one goal in life – to be a WAG. And as every true wannabe WAG knows, there are rules. One: pretend you don’t know he’s a footballer. Two: Don’t get drunk (or he won’t trust you while he’s off on pre-season tour). Three: Never dispute a thing his mum says (they worship their mums). When Remy starts dating Netherfield Park Rangers’ Robbie Wilkins (not Premiership, but good for starters), it seems like all her dreams have come true. Or have they? Remy soon realizes that being a WAG isn’t all it’s cracked up to be, that Robbie’s balls aren’t quite so golden…and that maybe there are smarter dreams to pursue. Michelle has already participated in workshops with The Reading Agency up and down the country, promoting literacy among teenage girls and encouraging them to aspire beyond the WAG myth. Michelle is an ex-EastEnders star, chart-topping pop diva and popular TV celebrity.

I was sent this book by publisher’s Walker Books UK. It is written by Michelle Gayle – ex-Eastender and WAG. Walker Books say:

“The ex-WAG, actress and singer has now turned her hand to storytelling as part of her mission to empower young girls and remind them that there is more to life than bagging a boyfriend. Shocked to hear that 2/3 of teen girls’ career plans involved marrying a footballer, Michelle set out to write a book that provided a realistic view of being a WAG without judging or patronising the girls she was writing for. The result is an honest, stylish and sassy reminder that marrying a footballer doesn’t always mean a happily-ever-after ending and that it’s far smarter to pursue your own career than to rely on Prince Charming.”

This story follows Remy – a 17 year old who, with the help of her older sister Malibu wants to marry a footballer. Malibu has rules and guidelines for this and on the first night they go out Remy meets Robbie. He seems interested in her and she is happy to be pursued. We see her at work – a beauty salon – and at home. We watch how Malibu dates a footballer; and someone she has as a back up, Boring Roger. The story follows several months of Remy’s life, as things fall apart at home, get serious with Robbie and the decisions she makes in life.

This book is written in diary form. I didn’t find this a problem as most entries were fairly long. The language is simple and easy to follow. I didn’t feel challenged by this book but that was OK. It was a gentle and quick read.

I found this book quite addictive. Although the storyline is not amazing – to be honest it is simple and fairly predictable – I was hooked. I read this book in about half a day. I didn’t mind the characters, although both Remy and Malibu were fairly shallow. They made for good reading however. I was intrigued, I wanted to know what was going to happen to them. I was a little disappointed with how Malibu’s storyline ended – it was unfinished but she settled for the seemingly shallow life of a WAG. Remy did end up with a nice man, but he too was a footballer. It felt like the message Gayle was sending was that once you are in that life, you can’t escape.

I know Gayle was a WAG and that she wanted to write this book to let girls know how life really is for WAGs, but to be honest it felt quite stereotypical: spending lots of money and cheating, controlling, angry footballers. It didn’t feel like there was a lot of insight into this world – and for some, the idea of living in a huge house with endless money will appeal to them. I’m not sure that Gayle has achieved her aim of warning girls of what this life is like.

I have rated this book 3 out of 5 because to be honest, it isn’t that good but it I was hooked. I was intrigued and my attention was held throughout the book. I developed an empathy for Remy and what is going on with her family and the life she got sucked into. This was a quick read and I think will appeal to teenage girls.