A Week in Paris by Rachel Hore 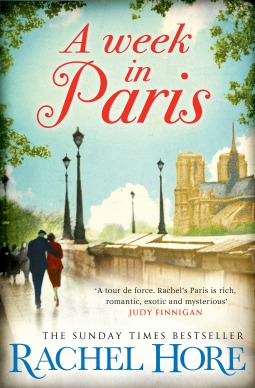 1961: Born on the day that WW2 broke out, 21-year-old Fay Knox cannot remember her early childhood in London, before she moved to a Norfolk village with her mother, Kitty. Though she has seen a photograph of her father, she does not recall him either. He died, she was told, in an air raid, and their house destroyed along with all their possessions. Why then, on a visit to Paris on tour with her orchestra, does a strange series of events suggest that she spent the war there instead? There is only one clue to follow, an address on the luggage label of an old canvas satchel. But will the truth hurt or heal?

1937: Eugene Knox, a young American doctor, catches sight of 19-year-old Kitty Travers on the day she arrives in Paris, and cannot get her out of his mind. She has come to study the piano at the famed Conservatoire, and lodges at a convent near Notre Dame. Eugene and Kitty will fall in love, marry and have a daughter, but France’s humiliating defeat by Germany is not far behind, and the little family must suffer life under Nazi occupation. Some Parisians keep their heads down and survive, others collaborate with the enemy while others resist. The different actions of Eugene, Kitty and their friends will have devastating consequences that echo down the generations.

I received this book from Netgalley to write an honest review – thank you so much for letting me read this novel, Rachel Hore is one of my favourite authors!

This book is set in Paris during two very different times – the Second World War, and the early 1960s. We discover the truth about Kitty, her time in Paris and the life she hid from her daughter Fay. Both women fall in love with the city, and both fall in love whilst they are visiting. Kitty makes her life there with Eugene and they have Fay there. However, war breaks out and Paris becomes occupied. It isn’t safe for long there and this story follows the hard decisions Kitty has to make to protect her family – and then the decision to keep the truth from Fay. Fay, visiting Paris as part of an orchestra is struck by how much of the city she remembers, even though she is sure she has never been there. This week-long visit will be extremely life changing for her.

I really enjoy Hore’s novels. I am yet to find out I don’t like! And it is the same with this book. I found the first few chapters a bit slow, but once I was further into the story I was captivated. I read large chunks in one go. This isn’t a fast read, but it is really enjoyable. I love historical books, and ones that jump around generations – like this one does. We weren’t always reading about the war, we were regularly transported to the ’60s, were we watched life for Fay change during her short time in Paris. The story kept me hooked. I found I needed to know what happened – what was going to happen to Kitty and Fay?!

As I read, I kept changing my mind about Kitty – during the war I liked her, but I didn’t really like her in the ’60s! I didn’t like how she hid this story and her opinion on Sister Theresa. I did like Fay. She was forgiving and kind – she cared about what she saw around her and I liked that. I’m still undecided about my opinion of Eugene. He was a man consumed by work and then by his secret role in the war, it didn’t seem like he put his family first.

This is quite an emotional book. I have a toddler, who is the same age as Fay was during the war, and I kept thinking how awful and hard it must have been to keep family safe. I don’t want to give away the story, but I found my heart breaking in places at the thought of what went on.

There is a lot of historical content in this book. Paris’ role under German leadership is explained well. Eugene was American, and it was shown how for some of the war he was safe because America had yet to join in the fighting. The threat of death, the aerial bombings and the town of Vittel were all mentioned and explained. Hore seems to have taken the time to make this accurate and show the readers just what life was like in both the war and in the early ’60s.

I really enjoyed this book. I did find the beginning slow, and I thought the end was a bit rushed too. I do have some unanswered questions, however, this was a great read. I was drawn in, caught by the story, moved by the characters and events, and find myself still thinking about the book now. Rachel Hore has written another fabulous book. I cannot wait for her next novel! I rate this book 4 out of 5 – this is a must read book!