A Gathering Storm by Rachel Hore 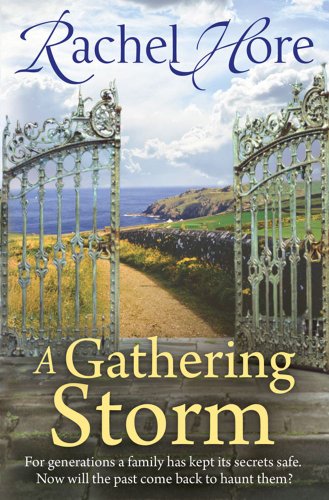 Addition: Paperback from the library

Photographer Lucy Cardwell has recently lost her troubled father, Tom. While sifting through his papers, she finds he’d been researching an uncle she never knew he’d had. Intrigued, she visits her father’s childhood home, the once beautiful Carlyon Manor. She meets an old woman named Beatrice who has an extraordinary story to tell …Growing up in the 1930s, Beatrice plays with the children of Carlyon Manor – especially pretty, blonde Angelina Wincanton, Lucy’s grandmother. Then, one summer at the age of fifteen, she falls in love with a young visitor to the town: Rafe Ashton, whom she rescues from a storm-tossed sea. But the dark clouds of war are gathering, and Beatrice, Rafe, and the Wincantons will all be swept up in the cataclysm of events that follow. Beatrice’s story is a powerful tale of courage and betrayal, spanning from Cornwall to London, and Occupied France, in which friendship and love are tested, and the ramifications reach down the generations. And, as Lucy listens to the tales of the past, she learns a secret that will change everything she has ever known…

Rachel Hore is one of my favourite authors and I was very excited to read this – and although I enjoyed it a lot, I don’t think this is her best work. The story is told from two viewpoints: Beatrice, an elderly lady with a surprising history, and Lucy, a twenty-something searching for answers. After Lucy’s grandmother died her Dad found some things about his past out and decided, without giving a reason, to divorce her Mum. After he dies, Lucy finds out he has discovered something about a man called Rafe. On a trip to Cornwall, she finds a lady who knows all about Rafe, and Lucy’s Dad Tom. Most of the book is told by Beatrice, who tells tales of her childhood spent with Lucy’s Grandmother, her adventures in the war, her history with Rafe, and ultimately about Tom.

I liked Beatrice. She is written as a warm girl, who suffers a far amount in her life. I wasn’t completely convinced by all of her story – mainly by her experiences in the war – how she happened to join the same spy group as Rafe and how she managed to escape. Lucy doesn’t feature too highly in this story, although again there were things she did I wasn’t convinced someone would do – such as going out on a boat with someone she has just met. But these things aside, this is a good read. I was gripped. I wanted to know who Rafe was, I wanted to know about Beatrice and what happened to her and I wanted to know about Angelina Wincanton – Lucy’s grandmother. By the end I had worked out who Rafe was, and who Tom was, but that didn’t spoil the story.

This is a well written book. It looks at life in the war, from two sides: the rich – Angelina going out dancing, messing with boys hearts, having coming-out parties and being spoilt; and the poor – Beatrice working hard for the war effort, falling in love and falling pregnant and the death of a fiancee. We spend time in occupied France, war-battered London and Cornwall. There were parts of the story that broke my heart and the whole thing kept me gripped.

I enjoy Rachel Hore’s books. I enjoyed this book. This is well worth reading! This is good quality historical fiction.

One thought on “A Gathering Storm by Rachel Hore”