The Racketeer by John Grisham 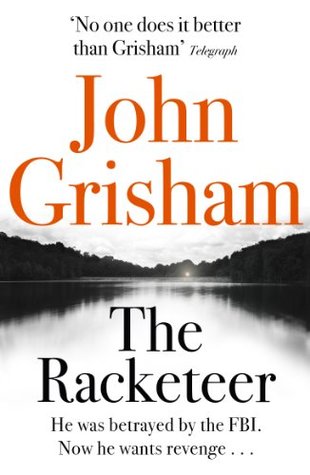 Given the importance of what they do, and the controversies that often surround them, and the violent people they sometimes confront, it is remarkable that in the history of the USA only four active federal judges have been murdered. Judge Raymond Fawcett just became number five. His body was found in the small basement of a lakeside cabin he had built himself and frequently used on weekends. When he did not show up for a trial on Monday morning, his law clerks panicked, called the FBI, and in due course the agents found the crime scene. There was no forced entry, no struggle, just two dead bodies – Judge Fawcett and his young secretary. I did not know Judge Fawcett, but I know who killed him, and why. I am a lawyer, and I am in prison. It’s a long story.

I have read a few John Grisham novels over the years, starting with the Rain Maker, but it is my husband who is the Grisham fan in our house. I borrowed The Racketeer from a friend for my husband to read and he really enjoyed it. In fact, he read it in one weekend, which is quite unusual for him. He recommended the novel to me, so I thought I would try it, and I am really pleased I did.

I wasn’t sure what to expect when I started this novel. The previous Grisham books I have read have focussed around lawyers fighting injustices in court. This book is slightly different – it is a lawyer seeking revenge on the FBI who have put him in jail. I looked at some of the Goodreads comments before reading this novel and it is a mixed bag. A lot of the hardcore Grisham fans seemed disappointed with this novel as it isn’t his usual style, but as someone who dips into his novels, I liked it. I found the story engrossing and I of course did not work out the twist. I kept saying to my husband “where has so-and-so appeared from and what is their link in the story”, but he wouldn’t tell me! I was intrigued by the story and was guessing up until the end.

I started off by liking Malcolm Bannister, but as the story progressed I found myself disliking him! In fact, I’m not sure I liked any of the characters. Not one of them sticks out in my mind as one I related to or even cared for as I read the book. However, this book has a good story so the lack of likable characters didn’t bother me at all.

I enjoyed this book. I thought it was well written with a good twist. I am pleased I borrowed it for my husband and then chose to read it myself. I even then passed it on to my Mum, who also enjoyed it. Grisham still writes about a lawyer, this novel just has a different spin on the role of the lawyer. I didn’t guess the ending and did have the “oh, I get it now” moment. I thought this was a great read, different from the novels I tend to read. It was exhilarating and fast paced. I was hooked from the beginning and can happily rate this book 4 out of 5.

One thought on “The Racketeer by John Grisham”