Take a Chance on Me by Jill Mansell 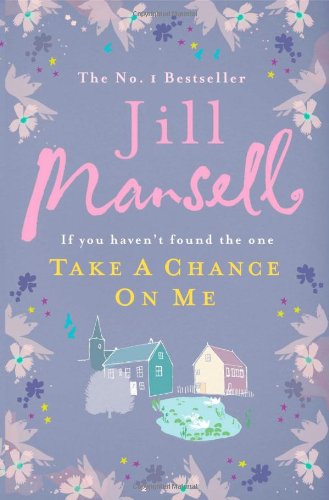 Cleo Quinn doesn’t have a great track record when it comes to men, but now Will’s come along she’s optimistic. Handsome, attentive and an absolute gentleman when it comes to her questionable cooking skills, he could be her Mr Right. Things are definitely looking up for Cleo… apart from one small problem with a rather large ego. Johnny LaVenture, sculptor extraordinaire and her childhood adversary, is back in Channing’s Hill and tormenting Cleo as if he’d never been away.

But life never goes to plan, does it? Johnny isn’t the only one stirring up trouble and, for Cleo’s family and friends, all kinds of sparks are starting to fly. If you think you can put the past behind you, think again…

I read this book back at the beginning of the year, and really enjoyed it. It is a book that had me glued to it all day. I couldn’t put it down and I finished it in a day. I have read a couple of other novels by Jill Mansell, and really enjoyed those too.

Mansell writes really good chick-lit. Her books are fun and hard to put down. They always perk me up and I always enjoy them. In this novel, Cleo is the protagonist. She used to work hard at school but a bout of bullying put an end to that. As an adult she makes a living driving limos. She is happy and content with her job and her boyfriend Will. Then the man who made her life miserable at school comes back to town for his father’s funeral her world is shaken. Her sister’s world is also being shaken. She has just discovered that her husband has an eighteen year old daughter. Did he cheat? Why didn’t he tell her?

Mansell weaves a web that revolves around two sisters, Cleo and Abby. Cleo is settled, enjoying life, her man and her friends. Then Johnny returns. His attention is on her, and her head is being turned toward him. She tries to cling on to her current relationship – to discover Will is actually married with children. She feels awful and won’t forgive him. What she doesn’t expect is to become friends with his wife. And what about Abby? Whilst putting away her husband’s socks she discovers a photo of his daughter. How and when did this happen? She discovers that the mother is the surrogate they wanted to use when they discovered Abby wouldn’t be able to carry a baby to full term. The woman had claimed she didn’t get pregnant, but she had in fact lied and kept the baby – a little girl called Georgia. There are twists and turns throughout the book and it is so enjoyable.

Mansell writes a whole host of readable, realistic characters. I liked Cleo. She was caring and concerned about her family. She is sensitive and she is not easily wooed. I felt so much for Abby. She was a damaged woman, as she couldn’t have children. Then to discover her husband had a child, and then for Georgia to come and live with them was tough. She was sad and angry and lost. Her character was realistic and heart breaking. I liked Cleo’s best friend Ash. I found it fascinating how he was a radio DJ who really was very shy and not that good looking. However, he cared and was fun with Cleo. I liked Johnny as well. Once he realised how he had made Cleo feel he was apologetic and watching him chase Cleo was great!

There is a lot in this book – affairs, barrenness, family, surrogacy and love. There is so much to get your teeth in. I felt every story line was handled really well. I was sucked into this world and really enjoyed being there. The ending is fairly predictable, but who doesn’t like a happy ending?!

I can easily give this book 4/5 because it was so good. From start to finish, I was hooked. Really worth reading if you like chick-lit.

One thought on “Take a Chance on Me by Jill Mansell”